L.A. Mountain park additions...Taken from the agenda of the Mountains Recreation and Conservation Authority for 2/2/2011

Consideration of resolution authorizing a conservation easement over APN 2425-009-033 in the Multiview Drive area of Cahuenga Pass and acceptance of monitoring fund, City of Los Angeles. [Staff Report] [Attachment] [Attachment 2] [Resolution] [Map]
Posted by Rex Frankel at 10:49 AM No comments:

Shasta Slopes Saved
2/2/2011--Today the Roseburg Resources Company and Pacific Forest Trust (PFT) announced they will establish a working forest conservation easement to conserve the significant natural resources of the company’s 8,230-acre Bear Creek tract, located on the slopes of Mt. Shasta in the northern California counties of Siskiyou and Shasta. This effort will complete the permanent conservation of the upper Bear Creek watershed, spawning grounds for the world-famous Fall River rainbow trout. 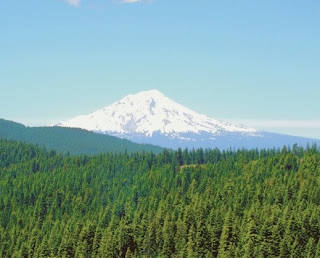 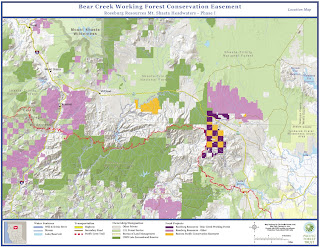 (click on map to enlarge)
The Bear Creek Working Forest Project is located in the PFT's Mt. Shasta Headwaters Conservation Area within the Klamath-Cascade region, source of the majority of California’s drinking water, heart of the state’s timber industry and home to one of the world’s most biodiverse conifer forests.

Together Roseburg Resources and PFT are applying to the California Wildlife Conservation Board, the Sierra Nevada Conservancy, the National Scenic Byways Program and private foundations for grants to fund the $7.8 million appraised value of the conservation easement. Roseburg has committed to sell the easement to PFT if sufficient funding commitments can be secured this year.


12/2010--We have some great news to share as 2010 comes to a close. This month California's Sierra Nevada Conservancy delivered the funds to complete our conservation easement on the 245-acre Calpine Meadow Ranch in Sierra Valley, CA, located at the southern tip of our Klamath-Cascade focal area.

Finalizing this conservation easement brings the total lands PFT has safeguarded this year to more than 3,000 acres - a cause for celebration!

PFT is working with local ranchers to create a conservation corridor across southern Sierra Valley, the largest alpine valley in North America. Located north of Lake Tahoe and a stone’s throw from Reno, Sierra Valley is the headwaters of the middle fork of the Feather River, where the snowmelt from the northern Sierra creates the largest wetland ecosystem in the Sierra Nevada. To date, in partnership
with five families, we have conserved 4,500 acres along the important transition between the upland forests and valley meadowlands. More conservation easement projects are underway.

PFT is working closely with the owners of large, well-managed commercial forestlands that surround this majestic peak, interspersed with the National Forest and Mt. Shasta Wilderness Area. The goal of these partnerships is to secure key properties that anchor the forest products industry of the area, while assuring the ongoing sustainable management of these uniquely diverse forests. The glaciers and snow pack of Mt. Shasta form the headwaters of the Sacramento River and several of its key tributaries, including the McCloud and Fall Rivers, which provide much of the water for thirsty Californians. To date, PFT has conserved more than 9,000 acres here, with several major conservation projects in development.
Posted by Rex Frankel at 11:08 AM No comments:

2/3/2011--A project to build a community of 60,000 residents along the last wild river in Southern California has sparked a feud between two federal agencies over plans to alter areas crucial to California condors and convert nearly 20 miles of waterways into concrete drains and levees.

The U.S. Environmental Protection Agency questions whether the U.S. Army Corps of Engineers, which is set to permit the Newhall Ranch construction 35 miles northwest of downtown Los Angeles, has adequately considered the threat of flooding caused by building in the flood plain of the Santa Clara River or its effects on water quality, tributary streams, Native American burial sites and an array of rare and endangered plants and animals.

The corps is expected to issue a Clean Water Act permit this month authorizing the developer, Newhall Land, to use 20 million cubic yards of excavated soil to fill in wetlands in areas to be developed over the next 20 to 30 years on the 12,000-acre ranch.
Of particular concern to the EPA are plans to fill in much of Potrero Canyon, which includes a rare alkali wetlands and roosting and foraging grounds for endangered California condors. Developers would also convert nearly 20 miles of tributaries and riverbank into storm drains and levees, which the EPA contends could increase flood risks to ranch residents and downstream communities, including Ventura and Santa Paula.

"We are not trying to stop this project, just modify it," said Eric Raffini, an environmental scientist with the EPA's wetlands regulatory program in Southern California. "We do not believe it is appropriate to put people in that flood plain, and we are proposing that they reduce the project footprint by about 80 acres in Potrero Canyon."

"We are prepared to elevate this case, if necessary, to our headquarters in Washington for review, which could result in a veto of the project," Raffini said.

Under the Obama administration, the EPA has overruled the Corps of Engineers before, notably in the EPA's decision to require that the Los Angeles River be managed as a navigable waterway from its source in the west San Fernando Valley to its mouth in Long Beach. That subjects the river and its tributaries to the tight strictures of the Clean Water Act...

...The corps is studying alternative proposals, including one that "would avoid all of Potrero Canyon," Allen said. But he noted that the corps has jurisdiction over only seven of the 109 acres of flood plain in dispute. "So the developer could still develop a lot of it without our permit," he said.

"Do I believe these issues will reach the point where the project will be stopped?" asked Emile Haddad, president and chief executive of Five Point Communities Management, a real estate management company owned by Haddad and Lennar Corp., one of the nation's largest homebuilders. "No. I want to find a solution. I'm a person who can sit down and make a deal. If the EPA's biggest problem is 80 acres and about 500 homes, we'll get rid of them. Done."

It may take more than that to satisfy the EPA...
Posted by Rex Frankel at 10:43 AM No comments:

Quick-Search of Subjects on the Site