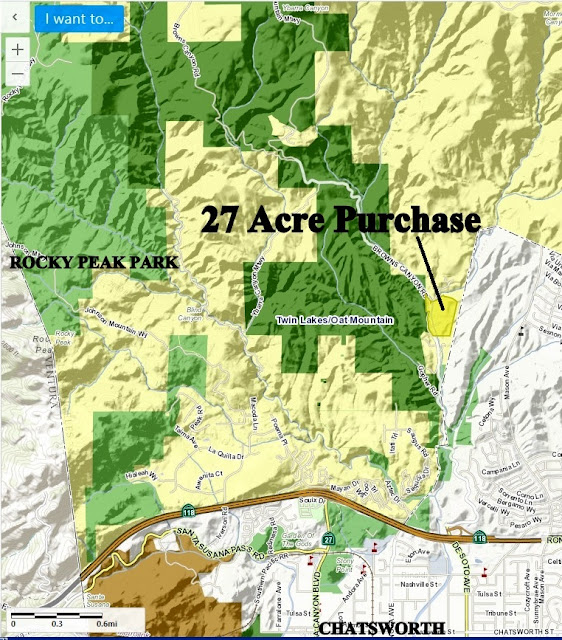 at the existing 40 year-old  650 acre Malibu Golf Club in upper Trancas Canyon:
--in 2014, County politicians OK'd conversion to Resort/golf/retreat center development; 450 acres to be dedicated as permanently preserved parkland, 20 acres will feature a cluster of 40 bungalows and meeting and sports related buildings
--This is the Regional Planning Commission's Approval Package for the project: http://planning.lacounty.gov/assets/upl/case/tr071735_rpc-package-20141119.pdf.
--This was the project website: http://themalibuinstitute.com/index.asp.
--At a public hearing in August 2014, the Board of Supervisors certified the project’s
Environmental Impact Report.
http://patch.com/california/malibu/supes-clear-way-for-major-renovation-at-malibu-golf-club

http://www.topangamessenger.com/story_detail.php?SectionID=&ArticleID=5026
locals seek to buy another 6 acres (in red border in map below) 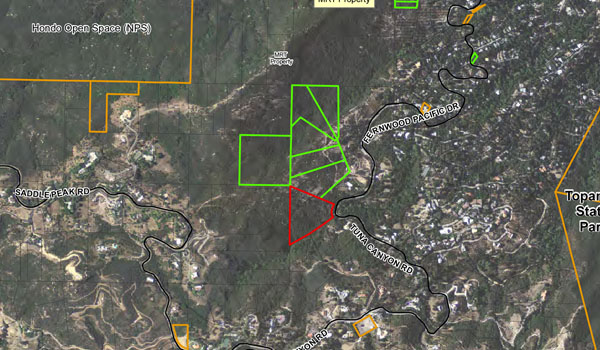 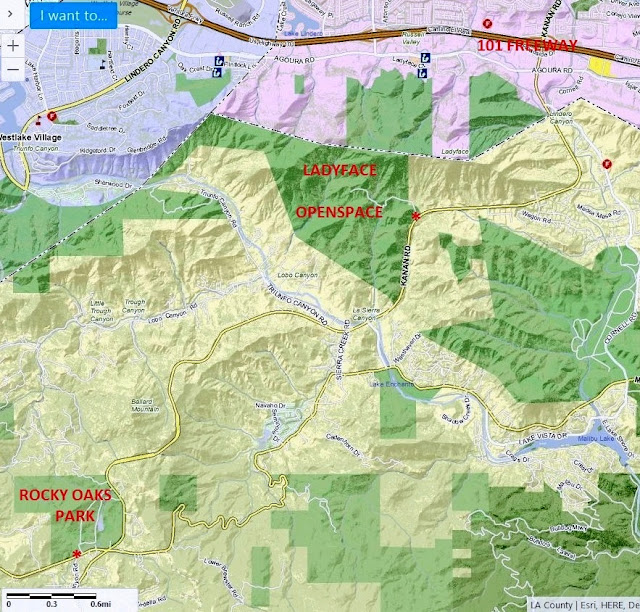 37 acres “Flat Top” bought by Northeast Trees group from Foursquare Church of Echo Park with county $$ run through MRCA. Land is eventually to be owned by LA City
http://www.theeastsiderla.com/2014/10/montecito-heights-hilltop-to-become-parkland/ 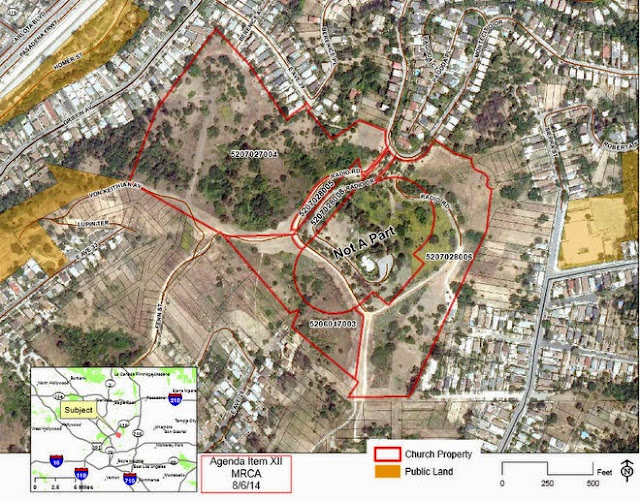 Synergy Oil & Gas, which has had oil extraction operations on property near the Long Beach-Seal Beach line, wants to drill 60 oil wells on 5 acres of land currently owned by the Los Cerritos Wetlands Authority. In exchange, Synergy has offered to give the agency 76 acres of its current oil field as a mitigation bank

The agency would also get 4 acres of land, currently the site of Synergy’s offices, to be used as a visitors center at the wetlands, according to agency documents.

The deal would also involve Synergy ultimately giving the wetlands authority an additional 72 acres of wetlands where Synergy would remove 58 oil wells as petroleum extraction operations are phased in at other locations.

Synergy currently owns about 156 acres in eastern Long Beach bounded by Pacific Coast Highway, Second Street, the Los Cerritos Channel and Studebaker Road. The nearby 5-acre parcel that Synergy would acquire in the trade is northeast of the intersection of Second Street and Studebaker Road
MORE DETAILS: http://lcwetlands.org/board/2016-05-05/Item_7_SynergyUpdate_smallfile.pdf 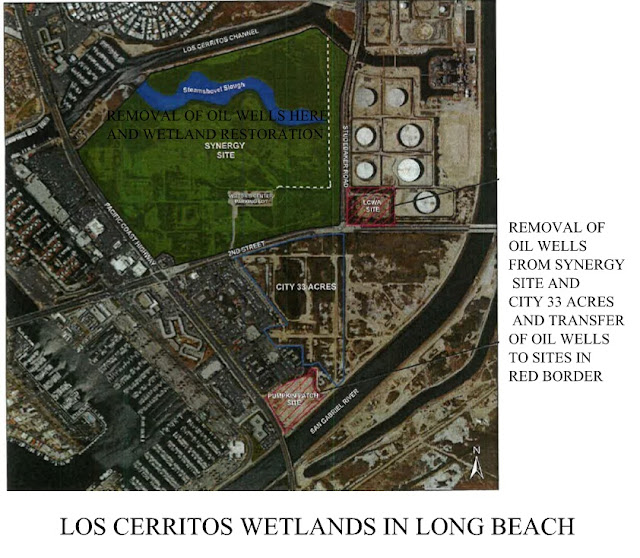 Feb 14, 2016: 10 acre Corralitas Red Car property to be bought with around $1.5 million from L.A. City, County and SMMC; adjacent to the LA River:
http://www.losfelizledger.com/article/red-car-property-to-become-wildlife-reserve/ 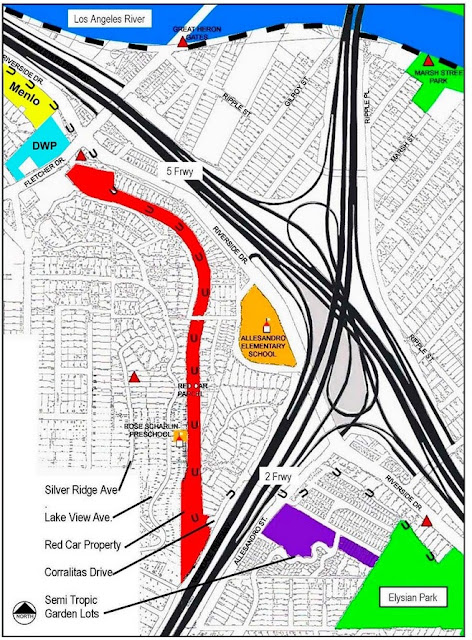 Reseda River Loop project at the confluence with the Los Angeles River and Aliso Creek: The new 2-acre park, located behind the West Valley YMCA, will create active and passive recreation and include a refurbished 1-mile trail connecting neighborhoods for nearby residents. Trail improvements will include a new pedestrian bridge to cross Aliso Creek, native plants, shaded benches, entry gates, interpretive signage and rest areas for cyclists and pedestrians.
http://sd27.senate.ca.gov/sites/sd27.senate.ca.gov/files/outreach/sd27-201408-enewsletter.php

ORANGE COUNTY:
http://www.ocregister.com/articles/land-714763-bolsa-trust.html
11 acres will be bought by Bolsa Chica Land Trust from Signal Landmark and Goodell to settle lawsuit; price is being determined

http://www.sbsun.com/environment-and-nature/20160915/region-gets-9-million-in-federal-grants-for-habitat-species-preservation
Projects that will receive $$:
--16 acres in City of Colton
--up to 4823 acres in the Coachella Valley
--1025 acres in Riverside County
--56 acres in the Chino Hills
--land in the Horseshoe Pebble Plain of the San Bernardino Mountains (SEE 9/10/2014 POST)
Feb 27, 2016
Arrowhead water donates 90 acres of land in San Bernardino National Forest http://www.sbsun.com/environment-and-nature/20160221/arrowhead-water-donates-90-acres-of-land-in-san-bernardino-national-forest

https://www.amargosaconservancy.org/breaking-news-600000-acres-amargosa-basin-public-lands-protected-forever/
9/15/2016—600,000 acres in federal lands in the Amargosa Basin saved from solar project development as part of the Desert Renewable Energy and Conservation Plan
http://www.pewtrusts.org/en/research-and-analysis/analysis/2016/09/14/blm-releases-final-california-desert-management-plan MAP of conserved lands in the plan

6/2/2016
Santa Cruz County Land Trust protects 124 acres of farmland, the Amesti apple orchard with a conservation easement.
https://www.instagram.com/p/BGKs_c4oyC9/
http://www.landtrustsantacruz.org/wp/wp-content/uploads/2016/06/PR_Amesti-Orchard-2.pdf
price of easement: $400,000
Amesti was protected with $200,000 from the Department of Conservation’s california
Farmland Conservancy Program and $200,000 from the Land Trust

3255 acres between Atascadero and SLO land saved with CE
http://www.ksby.com/story/31561390/3255-acres-of-land-donated-to-slo-county-preservation
The ranch area is 36 separate parcels making up the 3,255 acres. It is filled with streams, cattle range land, agriculture, and the man-made Eagle Lake. CE Donation was by Eagle Ranch LLC, owned by Greg and Jeff Smith
@lagunagreenbelt Mar 25, 2016

Posted by Rex Frankel at 9:59 PM No comments:

Posted by Rex Frankel at 9:51 PM No comments:


http://www.mercurynews.com/2016/07/18/california-coast-oceanfront-farmland-preserved-along-san-mateo-county-coast-2/
96 acre Cordes farm south of Pescadero bought by POST, they will put a CE on it, and may sell to farmer

Posted by Rex Frankel at 3:01 PM No comments:

Save the Redwoods League Saves Over 14,000 Acres in Humboldt and Mendocino Counties

First is the entrance to the Headwaters ancient redwoods preserve which the feds purchased almost 20 years ago:
https://www.savetheredwoods.org/project/westfall-ranch/ 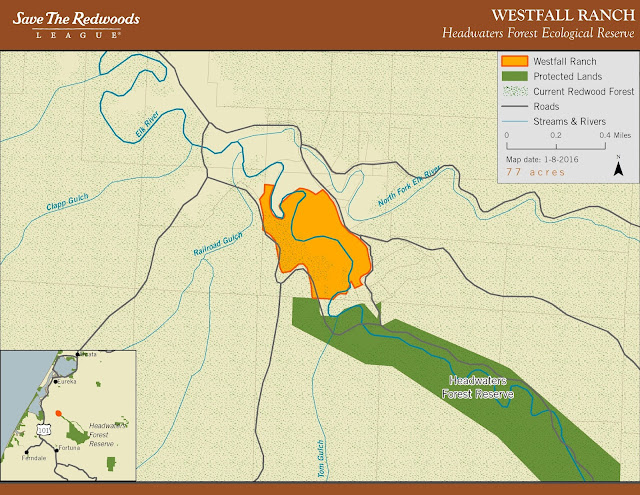 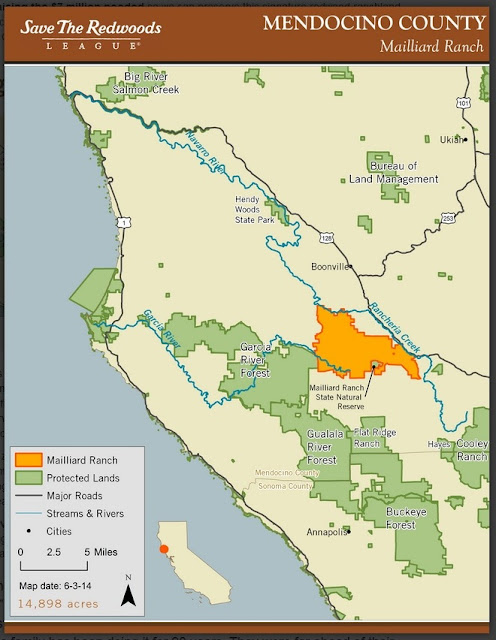 Posted by Rex Frankel at 2:45 PM No comments:

Quick-Search of Subjects on the Site